Is Tech Getting Boring? 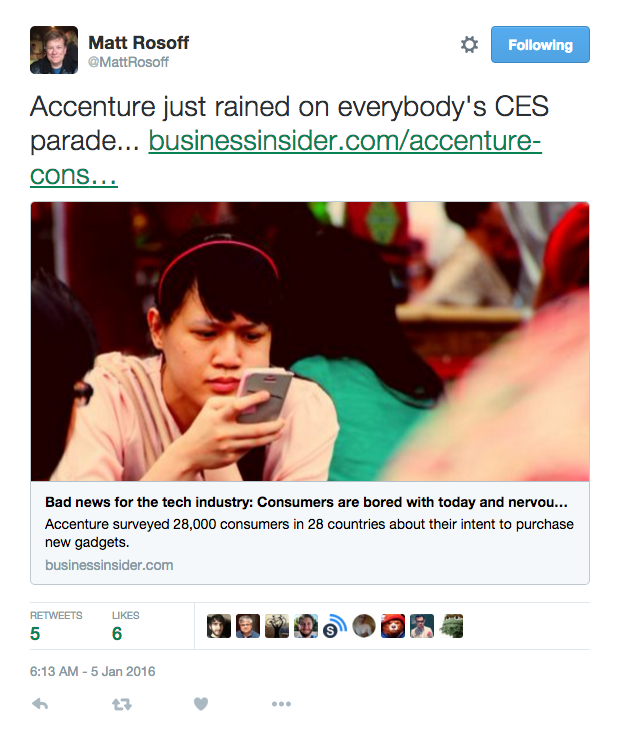 The post Is Tech Getting Boring? appeared first on John Battelle’s Search Blog.

Finishing up my reading for the evening, I came across this serendipitous tweet.*

Intrigued (well done, Mr. Rosoff), I clicked the link, noting it was to Business Insider, a publication for which I have decidedly complicated feelings**. In any case, the story was great, if single sourced. A reporter wandering the halls at CES found a desultory Accenture booth, manned by one Charles Hartley, a “company representative.” A quick Google search (done by me, but I digress), tells us Mr. Hartley is a PR executive focused on analysts and global media — an appropriate resume for manning a booth at CES, to be sure.

In any case, what Mr. Hartley shared with the BI reporter was rather counterintuitive to our esteemed industry’s current view of itself, and the reporter’s subsequent writeup made no bones about it. The headline: “Consumers are bored with today’s tech and nervous about tomorrow’s.”

In short, Accenture has released the results of a comprehensive (one imagines, 28,000 respondents worldwide, after all) study of consumers’ views about the tech currently on offer — mobile phones, VR, wearables, you know, all the stuff CES is on about. And it concluded that, well, consumers kind of think mobile phones are good enough, and the new stuff — VR, wearables — are interesting, but…they seem rather creepy.

The BI article doesn’t give us a link to the actual study that is being quoted, so I put in triple-time Google duty (it took one Google search plus two clicks to find). Here it is. Did I download the full report? Yes. Have I read it? No, but I did give it a thorough skim. Nevertheless, I can sense a clever marketing campaign when I see one:

Step 1: Gather insights. In this case: The most important industry in the world is poised for …. a boring year with slow growth and no consumer excitement. That sucks!

Step 2: Pick them lemons! Issue a report noting the preponderance of bad news, garnering the attention of the Wall Street Journal, Business Insider, and VentureBeat, among others (we hope — it’s only been two hours since the first piece went up!).

Step 3: Make the lemonade! Create a landing page that promises insights that just might fix the problem.

I’m loving this in ways that would take 1,000 words to explain, but that’s orthogonal, and my original story is not finished. Almost, but not quite.

Just yesterday I wrote my predictions post. I’ve not really admitted this before, but my predictions are nearly always based on gut feelings, slow baked over several months with conversation and whiskey, then composed in one two-to-three hour sitting***. So when I wrote prediction #8: “Apple Endures a Boring Year” — I had no idea Accenture was about to release the aforementioned study.

Man, what luck! Had I tarried even one day, I’d have been branded derivative. But even more, I wish I had really taken my gut feeling to its logical extreme. It’s not that Apple’s going to have a boring year. It’s that the entire industry may well be heading into a Cycle of Boring. Not that boring is terrible — great work is done during boring times, entire industries take root and prosper. Perhaps, in fact, we’ve already been in a Boring Cycle — I mean, what really changed your life in the past few years? Slack? SnapChat? I love em both but…they ain’t the iPhone.

I guess my point is this: When the most exciting thing you can imagine happening next year is VR from Facebook, or another Apple Watch — well, that’s just kind of disappointing.

I didn’t go to CES this year, but I’ve been to about 20 or so over the past 25 years. Perhaps by not going, I’m missing something Big, something that will truly Change the Game.

I sure hope so. What do you think?

The post Is Tech Getting Boring? appeared first on John Battelle’s Search Blog.

Pop-up ads: Why everyone hates them and why they’ll never die

How to Improve the Reputation of Your Company’s HR Department